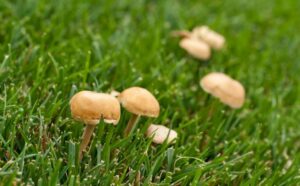 A word about fungus control.  Lawns are susceptible to many different fungi, the most common being Red Thread and Fusarium.

The way a fungus reproduces is to release millions of spores from its fruiting bodies which then find a new host. So treatment is very much control, not eradication.

The fungi will find lush weak grass more susceptible than turgid, strong leaf and likes moist and warm conditions so are most prevalent during Spring and Autumn. During the spring we treat the lawn by strengthening it so that it recovers from its attacker quickly. In Autumn we try to reduce lush growth and harden the leaf to prevent the attack.

We can also use fungicides in severe cases to prevent further damage and kill off fungal disease although there is no guarantee that the fungi will not reappear on the lawn again.

We have several calls each year about fairy rings.  Fairy rings are the result of a soil fungus.  As the fungus develops it makes the soil around it very dry and unable to absorb water (hydrophobic).  The effect is similar to another condition called “dry patch”.  Fairy rings vary in appearance; a ring of grass growing well, with or without the presence of mushrooms, but on close examination, you may see small white mycelium fungus coating it and/or a musty smell. A dark ring of green grass with an inner ring of dead grass or sometimes mushrooms appearing at damp times of year forming a vague circular shape.

In the case of fairy rings, prevention is better than cure. Keeping the lawn well aerated and scarified to control thatch.

Perfect for the green-fingered and garden proud LEARN MORE

For lawns that need a little extra attention LEARN MORE