Fusarium is a naturally occurring fungus present in nearly all turf nearly all the time, however, it only presents itself, like most fungi, when conditions allow. Warm, wet periods of weather are the norm for this fungus. Shorter daylight hours, still days and slow to clear fog and mist all aid its development.

As with most fungi, as soon as conditions change, i.e. it gets colder or longer days then it disappears. It presents itself as yellow patches, often with slimy, web like foliage within.

It is quick to develop and left untreated can devastate a lawn a very short period of time. Sometimes small white cotton wool-like growths can be seen, and in the case of snow mould (a similar fungi), pink growths may be seen. Any affected grass should grow back in time although spot seeding maybe necessary dependent on the grass species. 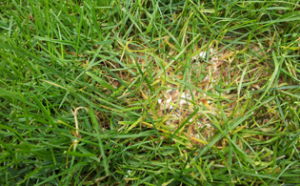 The fungi tends to kill the leaf blade whilst leaving strong rhizomatous roots intact. The fungus is present all year around, preferring temperatures between 12 and 19 degrees. The fact it is seen less in summer is due to the fact that the grass growth is normally such that it masks the fungus. When grass growth slows so the fungus is revealed.

Spot and treat dry PatchDry patch disease has presented itself in recent years when we have had consecutively hot summers and dry winters. The water content in the soil is diminished and during hot spells of weather the grass gives and dies. Lawns that are affected by dry patch normally have large levels of thatch which stop water penetrating through to the soil.

This a has a cumulative effect over years. When you look at these dry patches, in summer, the top layer is normally made up of a high quantity of thatch, preventing the ingress of water and the soil beneath is hydrophobic (water repellent).

If you look at these patches in winter the top layer of thatch is usually very wet and is a haven for moss. Cut beneath this and the soil is bone dry. To remedy this, the soil needs re hydrating and the thatch removing.

The use of wetting agents helps by reducing the surface tension of water, allowing it to be absorbed into soil particles easier. Aerating and spiking should also be used to create channels for water to sit in and be absorbed over time. Once the soil is rehydrated you can overseed or turf the affected areas.

Maintaining a healthy thatch level, around 10mm will help prevent this disease as will consistent watering.

Discover why LawnsOne are the most recommended independent lawn care specialists in the South East.