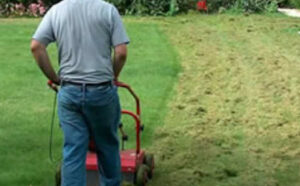 The process of scarification is fairly invasive. For this reason we will only scarify a lawn when conditions are favourable (or very likely to become favourable) for good recovery.

The process uses vertical blades to cut through dead organic matter and horizontal shoot growth up to 5mm below the surface of the lawn. Where horizontal shoots are cut they re-sprout leading to a denser sward.   The dead organic matter is lifted from the lawn, raked and disposed of. Different lawns produce thatch at different rates depending on their conditions, grass mix, aspect and soil make up.

As a rule we recommend scarifying annually however some lawns may need it biannually or even twice a year in Spring and Autumn, we can let you know what your lawn requires.

Thatch should not be confused with a thick moss layer although the two often intertwine. This is because the thatch layer traps water at the surface of the soil providing the right conditions for moss to prevail. We break the thatch down eliminating the environment for moss.

The thatch layer is formed from organic matter. During summer months the grass tends to die quicker, fall flat and then during the autumn new shoots grow through the thatch layer. The thatch layer is effectively just like a thatched roof.   A thatch layer of about 10mm is beneficial as it insulates the soil from high and low temperatures. It starts to become a problem over 10mm as it tends to grow quicker than it can be broken down by the soils beneficial bacteria.

Discover why LawnsOne are the most recommended independent lawn care specialists in the South East.